Is Real Estate a "Need to Know" Business?

Seems some agents in our market take learning the real estate business on a “need to know” basis.
For example: Waiting to learn about contract addendums until the need comes up. There was once an agent who had never sold a short-sale home  so they had never bothered to read or learn how to explain the short-sale addendum to clients… the same agent also felt that the new 4 page Seller Disclosure was too much “new stuff” to learn and keeps turning in unneeded HOA addendums with their listing paperwork... And the best is the agent who never came to one office training session on the last changes to the Standard Offer to Purchase and nearly had a mental breakdown when they went to use it for the first time with a client.
Did I mention there are some who never attend office sales or training meetings but then wonder why they don’t know about all the new changes to TMLS, websites, policies, or new technology their company is offering to associates? Change is a constant in our industry, you have to be prepared to zig or zag with it.
Imagine if a heart surgeon waited to learn how to deal with a lacerated ventricle until it actually happened… or if a police officer waited to learn how to use their weapon until a perpetrator exhibited deadly force on a victim. Those professionals don’t treat their business on a need to know basis and you shouldn’t treat your Real Estate Business that way either. Although as a REALTOR you are not usually dealing with life and death situations… the clients sometimes feel as if they are.
There are always opportunities to learn more about your profession and to become better at what you do…whether you’ve been in the business 30 days or 30 years, you can never know it all. Make a goal to attend your office meetings 3 out of the next 4 weeks, attend 2-3 training or coaching sessions over the next few months you normally would not have attended… The camaraderie is great and I think you will see a difference in the way you feel about your intellectual self and your business…
Eddie Brown © 2012
www.ICU-Coaching.com
Posted by Coaching For The Real Estate Professional at 5/30/2012 11:46:00 AM No comments:

Below is a report of important issues covered at the NAR Mid-Year meetings last week in DC.
Our discussions with Senator Burr and Kay Hagan were very informantion and interesting. For more info on the Rally or meeting events visit http://www.realtor.org/ 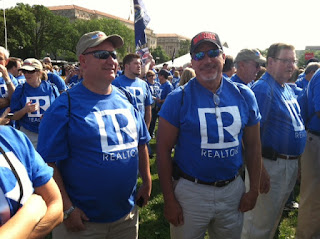 Rally to Protect the American Dream

President Moe Veissi recounted the success of the May 17 Rally to Protect the American Dream, at which 13,800 REALTORS® gathered at the Washington Monument to celebrate home ownership. The rally showed consumers that, when it comes to something as important as home ownership, “you're in it with them and for them. Whenever you do those things in life, you know you've accomplished something great."

In addition to the members and others who attended the rally, 13,600 people attended virtually, at RealtorRally.org, and more continue to experience the rally online. Twelve members of Congress attended, including Sen. Johnny Isakson (R-Ga.,) and Rep. Steny Hoyer (D-Md.), both of whom spoke at the rally, and 29 major media outlets, including CNN and CNBC, covered the event. And in a satellite media tour one day earlier, Veissi spoke with another 24 media outlets.

To increase competition in the commercial property data arena, an NAR subsidiary sold eProperty Data to real estate data company Xceligent. The combined company will provide a competitive alternative to CoStar/LoopNet, whose merger was recently approved by the Federal Trade commission, positioning it to be the dominant provider in the market. Xceligent’s standard rate will be 25 percent below that of CoStar/LoopNet, and NAR negotiated REALTOR® discounts for both services. Rollout is targeted in the next few months.

In recognition of African Americans’ historic struggles for equality in housing markets and for recognition as professionals in the real estate industry, the board passed a resolution congratulating the National Association of Real Estate Brokers on its 65th anniversary. “It’s extremely important for our members to remember our past and how we connect,” said Julius Cartwright, president of NAREB and a member of NAR.

A new set of policy principles were approved, advocate for the creation of a non-immigrant, real estate–related visa. The visa would be intended to encourage foreign nationals to buy homes in the United States. It would be good for at least five years and have rules that are reciprocal to rules in other countries that give favorable treatment to U.S. citizens. In the event Congress creates such a visa, NAR would provide training to help make members aware of visa and immigration rules so they can avoid liability.

The board took a number of actions related to the association’s Code of Ethics and its enforcement.

·      Approved a pilot program by the California Association of REALTORS® to apply “lateral discipline” to members who belong to two or more local associations and are suspended or expelled from one of them. Under the “lateral discipline” idea, members could be subject to the same discipline in all of the associations to which they belong. The pilot will run until the end of 2014, at which time CAR will file a report on it with the Professional Standards Committee.

·      Changed Standard of Practice 12-10 to make it clear that the “true picture” mandate applies to different types of Internet content and prohibits REALTORS® from presenting content developed by others without attribution or permission.

·      Amended Section 21(f)(3) of the Ethics Hearing, Code of Ethics and Arbitration Manual to clarify that an ethics complaint gets sent back to the Grievance Committee if the consumer filing the complaint doesn’t show up for the hearing and hasn’t requested a continuance in writing.

·      Stated that the ethics training program for new members, called “Required Learning Objectives for New Member Orientation,” and the program for continuing members, called “Required Learning Objectives for REALTORS®,” will satisfy the ethics training obligation for the current four-year cycle, which ends at the end of this year.

·      The board gave MLSs discretionary authority to require placement of an MLS-approved lock box/access device on listed property if any device giving access to real estate professionals and service providers is authorized by the seller and any occupant. This discretionary authority is intended to ensure reasonable and timely access to listed properties by other MLS participants and subscribers.

·      Approved $1,614,372 to the Oregon Association of REALTORS® to support its campaign to win voter support for a constitutional amendment banning a state real estate transfer tax.

·      Approved $161,667 in legal assistance for seven cases, involving 1) allegations of commission-fixing against brokerages, 2) application of a statute of limitations on a state arbitration requirement, 3) ending an old state injunction against an MLS, 4) challenging misappropriation of MLS data by a third-party Web site, 5) defending farm owners against a disputed pollution charge, 6) appealing a duty-to-arbitrate decision, and 7) fighting a conservation effort that could hurt property owners in a flood plain.